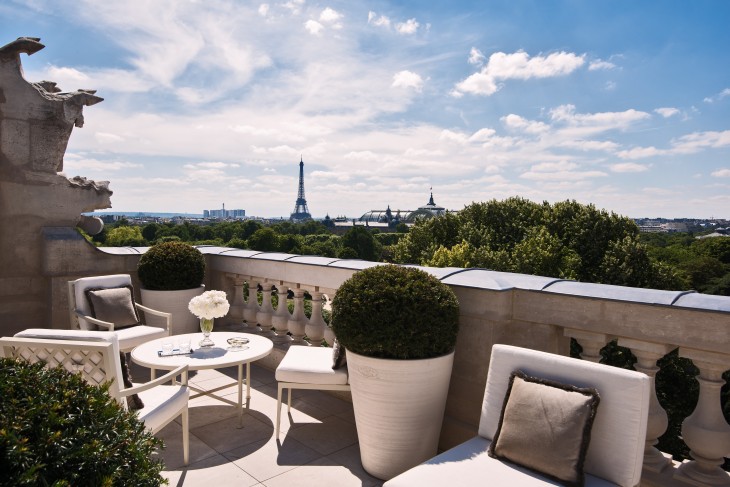 London, 10 July 2017
With the reopening of the legendary Hotel de Crillon this week and the exciting line up of properties being unveiled within the next twelve months, Paris is without doubt as attractive as ever and a real magnet for hotel aficionados. The Paris Tourist Office counts up to 14 major hotel openings between now and the end of the year and already lists a large number of Palaces, boutique and design hotels set to open by the end of 2018.
Here is a snapshot of what’s to come:

The Grandes Dames of Paris

Hotel de Crillon, reopened its doors on 5th July, as a Rosewood Hotel, after over four years of renovations. The legendary hotel first opened in 1909 and has welcomed celebrities, politicians, artists, princes and queens throughout the decades. The property now offers 124 rooms and a spa in a brand-new second basement. While Richard Martinet looked after the renovation of the façade and first floor, Aline Asmar d’Amman was in charge of the artistic direction, Chaban Minissian, Tristan Auer and Cyril Vergniol looked after the interior design and Louis Benech the landscape architecture and finally two suites and one room were decorated by Karl Lagerfeld. The hotel now welcomes a gastronomic restaurant called l’Ecrin, a convivial brasserie named Brasserie d’Aumont, a 60-seat bar, Les Ambassadeurs and a winter garden.
Closed now for three years, the left bank icon Lutetia will reopen in Autumn 2017 as part of the Set Hotels Group. Opened by The Board of “Le Bon Marché” to accommodate the department store’s international luxury suppliers and customers, the hotel is currently undergoing a complete renovation and restoration. Guests can expect 184 rooms and suites across seven floors and seven one-of-a-kind individually
designed signature suites plus a penthouse. There will be a new Akasha Spa, one of the largest in Paris at 700 square metres, with six treatment rooms and a 17-metre swimming pool, a new courtyard, a jazz bar designed by Jean Michel Willmotte, an exclusive Cigar Bar and the popular Lutetia Brasserie will also reopen with an open terrace and a new mezzanine area.
Cheval Blanc Samaritaine, set to open in 2018, will be located within the iconic building of La Samaritaine Department Store which was designed in the 1920s by Henri Sauvage. The art deco gem is being renovated and redesigned by Edouard François and Peter Marino and will offer 72 bedrooms, a range of restaurants and a garden terrace above the building’s famous glass rooftop offering some of the best views of the French capital.
It is also worth noting that the glamorous Barriere Fouquet’s, which is currently closed, has embarked on a major renovation and expansion programme with rooms being renovated by designer extraordinaire Jacques Garcia. The hotel should reopen by the end of the summer while the legendary brasserie will return sooner, on 10 July. By the end of 2018, the hotel will feature another nineteen rooms and suites with superb views.

The Hoxton, Paris is set to open this summer on Rue du Sentier, an area once famous for being a multicultural textile and garment manufacturing district but now slowly changing to accommodate media companies. The Hoxton Paris, like its sister hotels in London and New York is a place to sleep, eat, work and play at any time of the day. It has banished those hotel features that infuriate travellers nowadays by free water, WIFI, one hour of free calls, a mini fridge so guests can stock up on local products from the lobby shop at supermarket prices, and a daily emergency breakfast bag. The Hoxton, Paris will have rooms in all shapes and sizes and some will even have terraces or garden views.
Distrikt Lazare will also open this summer in the busy St Lazare area in the 9th arrondissement. The Hotel is an urban spa hotel with a swimming pool, 56 rooms and a cocktail bar.
The Grand Boulevards hotel will be the Experimental Cocktail Club’s second hotel in Paris and its most ambitious project yet. It is due to open in September 2017 with 52 rooms, a restaurant and a rooftop bar on the buzzy Boulevard Poissonnière.
Brach Paris, part of the Evok Hotels Collection, will open in the Spring 2018 in the affluent 16th arrondissement, close to the Trocadero and the Eiffel Tower. Designed by Philippe Starck, the hotel will be a space full of freedom and light. The world-famous designer has created a place of modern romanticism, rigorous yet elegant, that reveals its breath-taking glass structure behind lush vegetation. Playing on contrasts between natural, raw materials like metal, wood, concrete and leather, whilst combining avant-garde style with timeless appeal, the hotel will boast 59 rooms and suites with terraces, as well as welcoming lounges. Restaurants serving healthy, balanced cuisine, a delicatessen and cocktail bar, a kitchen garden suspended over the rooftops and a sports club will all be part of the immense glasshouse that is Brach, where humanity mixes with nature, innovation, culture and poetry.

Villages Nature Paris is an ecological leisure complex created by Disneyland Paris and Pierre et Vacances, with 1,730 cottages across 259 hectares. Opening in August just 32 km from Paris, It comprises five immersive worlds; Aqualagoon, the biggest water park in Europe, which is all heated with geothermal energy; the fully functioning BellaVie Farm; Extraordinary Gardens, with four gardens representing the four Greek elements; Forest of Legends, with its playground full of dens, tree houses and hanging nests; and Lakeside Promenade, the heart of the village, with shopping, restaurants and cafes as well a host of sport and leisure activities. A wide range of accommodation is also on offer on site: Coccoon VIP for those after a
serene environment and a spot of wellbeing; Country Premium cottages for a relaxed retreat inspired by English country living; and Clan Comfort’s whimsical cottages set in the woods. Villages Nature Paris embraces sustainable tourism and employs all the latest best practice method to minimise its ecological impact.

Also on our radar…

The first Fauchon Hotel will open in 2018 at the corner of Place de la Madeleine and Boulevard Malesherbes, with 60 rooms and a Fauchon Bar; Marriott International will open a five star hotel with 39 rooms and 37 suites in the “hôtel de Berri”, 1930s mansion off the Champs-Élysées, under The Luxury Collection by Starwood; Mama Shelter will open a second hotel in Paris within the Paris Expo Porte de Versailles exhibition, conference and convention center, in early 2019, with 200 rooms, a 350 seat restaurant, 500 square metres of workshop space, plus a rooftop bar and restaurant; also look out for fashion store Zadig & Voltaire’s first hotel, in St Germain des Prés on Rue de Grenelle, with 40 rooms a restaurant and a boutique, focussing on confidentiality and exclusivity.