“Honey, this looks like a lot Wyoming, or maybe Montana,” the American couple standing on the Aubrac plateau, said, as they took in the spectacular view of high pastures, rolling hills and distant Puys — or extinct volcanoes — and waited for the Tour de France to pass by.

Like many, who travel to France each July from around the world, this was their first experience of Tour watching, but like everybody else they were getting caught up in the frenzy of excitement surrounding local hero and French challenger for the maillot jaune, Romain Bardet, who was born in nearby Brioude.

In preparation for the Tour, the isolated Aubrac plateau, a vast area of uplands, carpeted with wild flowers, stands of ancient trees and roamed by the distinctive Aubrac cows, had burst into life, with roadside barbecues accompanied by local specialty, aligot — a hearty mix of potatoes and crème fraiche — and local lentils.

Later, when the race swept down from the Cote de Saint-Vidal into the streets of Le Puy-en-Velay, overlooked by the towering Cathedral, the Chapel Saint-Michel and the statue of Notre-Dame-de-France, a sense of belief in Bardet was in the air, which may be down to Le Puy’s status as the starting point for the pilgrimage route to Santiago de Compostela.

Le Puy and the surrounding area is renowned for its distinctive lentils and for lace making. Its religious sights and many restaurants make it a perfect stop for a rest day on the Tour.

There is plenty to see in the town and for those needing to stretch their legs the nearby Lac du Bouchet, at over 1,200 metres, offers the chance for a refreshing high-altitude dip! 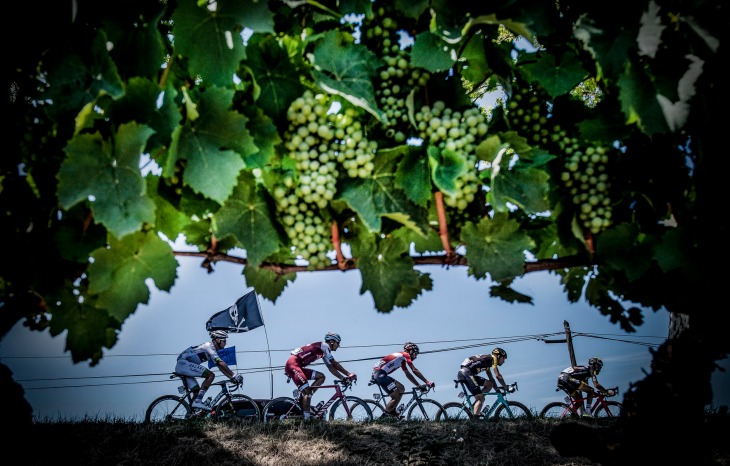 But it’s only a brief respite for the Tour convoy to catch its breath before it moves on again, from Le Puy-en-Velay to Romans-sur-Isere, as the 2017 Tour enters its final act.

From the high plateau of the Haute Loire, the race descends towards the Rhone valley, first through the Ardeche, and then speeding through Tain l’Hermitage, renowned for its Cotes du Rhone wines and very fine chocolate, before a finish in the shoe-making centre, Romans-sur-Isere, on the banks of the Isere.

The grand finale will be played out later this week, when the race enters the Alps. All will be revealed against the spectacular backdrops of two of France’s most beautiful mountain passes, the Col du Galibier and the Col d’Izoard. As they say in Wyoming (and maybe in Montana too) hang onto your hats — it’s gonna be emotional!